I have been recently trying to get in touch with Tyson Fury to arrange an interview before the Anglo-Saxon press really try and tear him apart. In this press conference he declares how he does not care about boxing and how he is fighting just to put food on the table.

Good on him, he has a pregnant wife at home and family is his main concern.

Fury, who is the undisputed heavyweight champion, has got nowhere near the credit any other British World champion has had. This is because he does not enter into the Anglo-Saxon model. He is an Irish traveller with a Christian belief system, and what’s more, he is outspoken.

The press will be eyeing up their next move.

White Working Class Mortality Rates Are Increasing
Other studies indicate rising death rates for a white working class that is in a slow-motion economic and social meltdown. Self-destructive behaviors are outpacing …
The Anglo Saxon Empire is spiralling into chaos and the Anglo Saxon poor have been abandoned.

In 2013 USE predicted that a white population in the developed world would be made into refugees as the consequence of natural or man-made disaster. A little bit later than predicted but this could be it…

Obama Leading from the front drinks some Flint water (filtered of course) Yum!

Prices for Rice can be expected to rise sharply in the coming year. Apparently it’s the fault of the weather- chaos caused by commodity speculation will have got nothing to do with it…

TRiUMPh of the Will

And AS liberals can’t decide if they even want democracy anymore..

This Is Not America

Nose on your face..

In this piece Mr Edelman says:

‘Remarkably, today the derivatives positions held by the large banks approach 10 times those of 2007-2008. In four banks alone, they exceed the GDP of the entire world. This is the interesting consequence when unchecked risk management rests in bankers’ hands.’

Is this a co-incidence? If it is not a co-incidence, then it must be intentional musn’t it? What could be the intention behind creating ten times as many derivatives as there were in 2008?

The potential for a depression looms on the horizon. The Vermont senator is the only candidate who can stop banks from spiraling out of control again

This diagram shows in a very clear and succinct manner the point I have been making in Vector History about capitalism and financialisation DISINTEGRATING society..

The best explanation so far 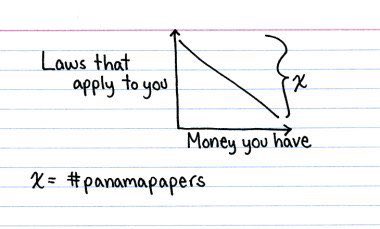 American Trotskyists can’t seem to understand why information like this doesn’t provoke a move towards ‘class’ politics but instead provokes a move towards what they call ‘identity’ politics. Until they address the arrival of CULTURAL CONSTITUENCIES, they are going to have to continue stumbling around in the dark..

Roll over
Reuters coverage of the Syrian theatre of war just seems to get more ridiculously lopsided by the day..

This black gentleman might not quite be on the ball about everything, but he is having a go at thinking about Eurasia etc., so good for him. He seems to me like a reasonably nice, relatively harmless type.  But oh dear, check out the response..

Imagine a world without whiteness

Professor Calls For “Whiteness” to be “Abolished”
“We need to….demolish the whole concept”

Professor Calls For “Whiteness” to be “Abolished”

This is what ancient Greek democracy actually looked and sounded like. It wasn’t Lawrence Olivier and Marlon Brando walking about in bedsheets making speeches over Gina Lollobrigida, it was this: Rape, torture, cruelty and murder. All over Athens, all over Sparta, all over. Next time someone tries to give you the spiel about how noble and great democracy was/is, show them this….

When police searched the run-down, two-story house on Tuller Street in Detroit, they found something that took even longtime cops by surprise: a woman chained to a stripper’s pole, with a padlock around her neck.